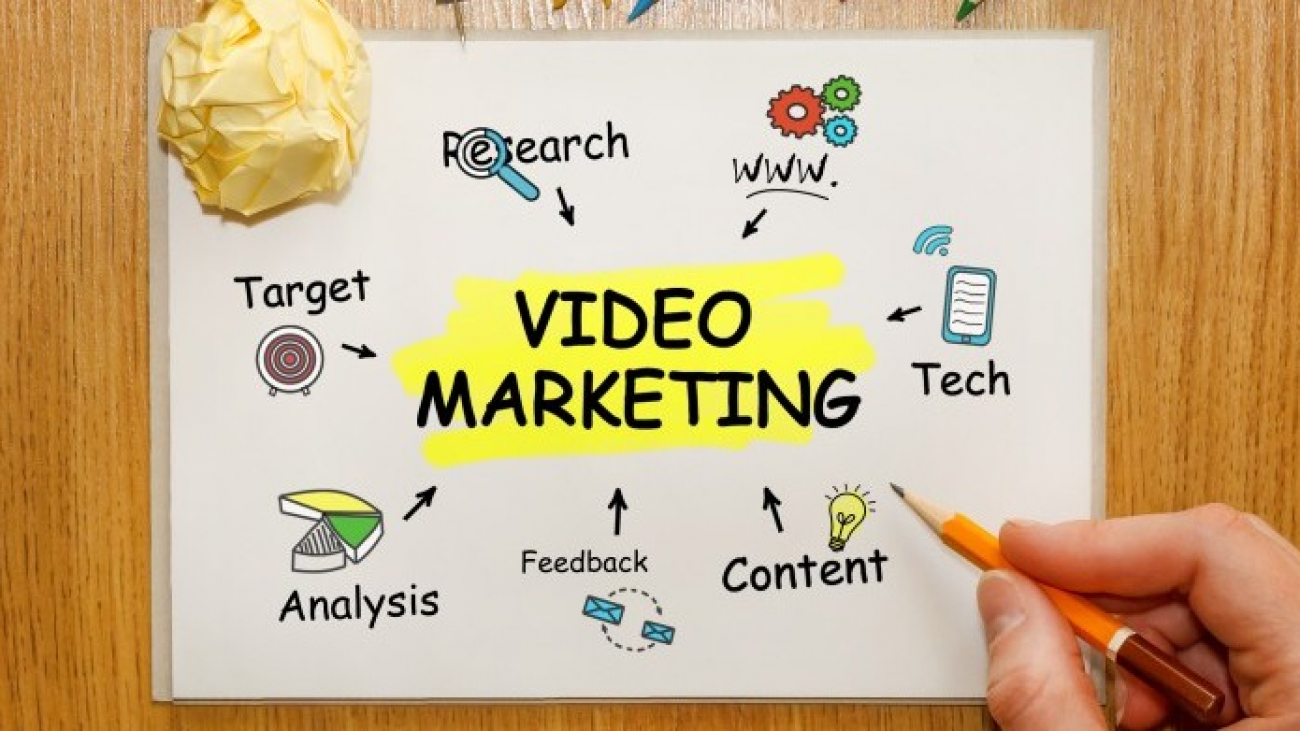 Every year brings new progress, and nowhere is change more palpable than in the field of technology — and how people use it. The field of marketing, which is perennially affected by technological progress, likewise roars along at full speed. The year 2017 will see the dawn of new techniques, the plateauing of old ones, and the resurgence of others we once thought obsolete.

Read also: Why Business Should Have Explainer Videos in 2017

Everyone can place their bets on different developments, but one thing is sure — video will remain to be the king of all media, and will continue to be the most powerful driving force in marketing. Let’s see what the experts have to say about this, and how the dominance of video will affect other marketing aspects.

Forbes’ list of 2017 trends highlights the evolution of Snap — the service that took the social media world by storm under its former name Snapchat. Through its evolution, Snap has opened new doors in the field of video. Taking the cue from Instagram’s in-the-moment experience, Snap now takes things one step further by bringing video into the real world via its Snaptacles. Of course, this makes Snap the perfect platform for viral marketing campaigns.

In contrast, Forbes paints Twitter’s fate as that of a red giant — still bright, but is in the later stages of its life cycle. The text-dominated platform induces what the article calls “Twitter fatigue”, caused by a steady stream of small updates. This stands in contrast with Instagram and other platforms (again, Snap) that offer more detailed looks at people’s lives with less frequency. This points us again to a positive trend, as video is the king of “detailed looks”. Both Instagram and Snap have also ventured into providing video-related services for its users.

The growing strength of these social platforms point to an effect that others may find surprising. In a world of declining organic visibility, where consumers wage a constant war with advertisements, 2017 will bear witness to an “ad renaissance”. This is due to the power of social platforms, which allow new forms of viral marketing campaigns. New ways of thinking are in, and pretty, imaginative social media posts are taking the limelight.

If you want to get the most out of social media video marketing this year, an inspired, creative, imaginative post is your best ticket.

Forbes further goes to show how video will be used in 2017 — from VR and 360 videos to new areas of communication. Video is as versatile as anything out there, and using it to cultivate customer experience is an important thing.

2.) CoVideo sees diversity in video use

CoVideo has always focused on the different ways video can be used as a marketing tool. This 2017, video marketing takes center stage as one whole entity — not just video trends that can be applied to marketing, or vice versa. Video marketing is now a cohesive strategy, with its own trends.

CoVideo sites a telling statistic: 44% of people surveyed prefer to watch a video in order to learn something new about a product or service. This is due to the engaging, personal, authentic experience that video cultivates. With a little creativity, this can sway even the most hardened customer to “add a little more” to his life with the service or product in question. This, of course, makes video an indispensable component in the sales thrusts of marketing campaigns.

But where this video can be found will see some new developments. Video is no longer restricted to YouTube links and Facebook posts. With the power of data processing, marketers can now find out where their market is most active in. That platform can now be used to convey video — whether it is SMS messaging, non-mainstream social platforms, or email.

Yes, email — video can also be used in email blasts in lieu of the traditional text-based pitches. Members of your email list will surely appreciate having something other than a wall of text in your message. And like the content of the message, your video will have to be well-targeted and relevant to its recipients. This is another trend that the CoVideo team sees in 2017 — relevant, timely messages that will make the potential audience feel like watching the video is actually worth their time.

Entrepreneur recognizes the perennial problem of marketing — how do you find something new to pique your audience’s interests? The answer, it proposes, is content. Specifically, human (end-user) centered content.

For starters, the article recommends native marketing. This is not (yet) content marketing, though it is a good starting point. Native marketing is creating an ad on a specific platform, which blends into the nature and content of the latter. It provides value to the users, and subsequently meets their standards. This can also be done through videos, which fit in with the message of the site where it is uploaded to while subtly endorsing a certain product or service.

Then there’s content marketing itself, which is a leading piece of any marketing campaign. Aside from the traditional stuff, videos can also be used to establish an immediate connection to the target matter. For those wanting to make a lasting impression, a well-made video can be more memorable than any static words.

Livestreaming can also be a new marketing strategy you could employ. This is the epitome of “instant connections”, and with the huge number of video viewers at any given time, you can reach countless people at the same time. There’s something genuine about a livestream that makes it engaging for people, and marketers can tap into this.

And once more, we go back to an idea pioneered by Snap (Snapchat), that also translates into a marketing strategy. Setting a time limit for all content (like Snap’s 1-day self-destruct) gives urgency to any campaign. It makes people want to view your post, at the risk of being left out of the loop because they cannot “go back to it later”. This can be a good part of a marketing strategy.

According to this post on ClickBank, YouTube has become the second largest search engine in the world, just after Google. This is telling, because YouTube gives you nothing but videos. Other all-purpose search engines like Bing and Yahoo! dwarfed under YouTube’s reach, reflecting just how much priority the world has given to videos.

The article also highlights just how much competition — and opportunity — a video marketer has. According to it, more video is being uploaded in a single month than what has been shown on television for the past 30 years.

Forbes’ prediction of an ad renaissance is also affirmed, with a little data — that a person watches an average of almost 17 minutes of video advertisements each month. This means a well-made, well-targeted, well-timed video ad still has the potential to draw viewers and be a powerful marketing tool. Just like in the olden days.

Finally, there’s the analogue to Forbes’ forecast of Twitter’s gradual decline. ClickBank asserts that while 80% of people may view videos, only 20% will view text. The problem is that many marketers still focus on the written stuff, without using video to their advantage. In contrast, however, only 20% of people work with creating video while the remaining 80% continues with the pure text-based campaigns. By jumping on the video bandwagon, more marketers can be on the forefront of development.

Virtual reality is the newest emerging entertainment platform — but Chocolate Bar Studios, a video creation service itself, says that it is not meant just for play. VR, exemplified by Google’s Cardboard headset, is the future of immersion. That last point, coincidentally, is one of the main goals of marketing.

The post highlights the fact that there are so few social media posts that cater to the VR market, even if VR headsets are already within the grasp of many. Creating innovative content that incorporates VR’s unique 360-degree view can place viewers right in the middle of the action, creating infinite possibilities and lasting memories.

The post also affirms the continuation of a trend that has seen an upsurge within the last couple of years — “infotainment” and highly relevant content. These strategies also help make your video stand out, and reach its audience faster. By creating value for the customers, they are entertained and informed at the same time.

Finally, the post suggests an important video-making tactic, derived from Huffington Posts’ successful social media strategy. Instead of feeding all the relevant information at once at any part of the video, try dripping the information slowly throughout the clip’s duration. This helps keep the audience engaged up until the video’s end. This allows you to pitch an offer (or anything you want) at the end of the clip — a part that is usually ignored by users when they already got every information they need.

Wooshii’s article starts with a staggering statistic affirming Facebook’s power in the social media landscape. According to it, the site’s daily views grew from 1 billion to a whopping 8 billion in 2016 alone. In this torrent of views, the dominance of static images has waned considerably. All sources say it — Facebook and its videos are undisputed in the marketer’s arsenal.

But, just like Entrepreneur, Wooshii says that not just any video will do. The Live phenomenon is on the up, and marketers who use it are in august company. Even powerful people like Barack Obama and Mark Zuckerberg himself has used live video in order to better reach and interact with their followers. Live videos allows your audience to ask questions, leave comments, and give opinions as if they really were there. This personal touch can make any marketing strategy stand out, by imbuing the product or service behind it with a human touch.

There are several options for live video. From the behind-the-scenes of an event, to a live performance or commentary, there will always be a groundbreaking idea depending on your product or service.

Of course, Facebook is not alone. Twitter has Periscope, and then there’s the aforementioned services that provide some big competition.

Specifically focusing on brand awareness, Wooshii also hails video as an important part of the consumer experience. This is especially true for promoting awareness and engagement for a brand. It has been found in a survey that 73% are more likely to buy something after viewing a related video demoing the product.

7.) Inspired tells you to keep it real and narrow it down

Inspired Film & Video is a UK-based company specializing in video production — so they know a good deal about what makes an effective video. And to them, a laser focus would make a difference this 2017.

Of course, they also forecast the trends on 360 video, live streaming and Facebook — but they also emphasized the importance of having a genuine story to tell. The gist of the matter is that people are growing cynical about advertising. They want to see the real life events, not the things that are carefully staged in a studio. To this end, more companies have started doing documentary-style campaigns to promote their brand. These brands associate themselves with a positive cause, making a change and delighting people. Consumers love it that way.

Another trend will be the greater application of Geo-Localized content (like, again, Snap’s geofilters). This breathes new life to “place marketing”, that determines the best content to show a person based on his detected location. Another groundbreaking technology that came out of the concept was the phenomenal game Pokemon Go. Imagine how geo-localized video can help increase your brand’s exposure.

The year 2017 will bring in a storm of progress, and it’s the first thing you can do to stay on top of oncoming trends. The blogs mentioned in this article are just some of the go-to, authoritative places you can check out to guide you 2017 marketing decisions. After all, knowledge is power.